As usual we went out to Point A with Captain Ishii and his CHOEIMARU, see Fig. 1. This time we not only failed to do the measurements but also we damaged our detector due to water leakage into the detector case.

It is now found that the immediate cause of the leakage is a cut on the covering of the USB signal cable, see Fig. 2. The cut is made by scratching near the cable gland. Even though the cage had two stoppers at its bottom to hold the detector case, the video recorded in GoPro showed an appalling scene that the detector case escaped out of the cage. A photo taken on boat revealed that the main rope which should have been tied to the chain of the cage was wrongly tied directly to the three wires of the detector case. When we pulled the cage up by the main rope in that situation, the weight of the cage was on the three wires and the two screw bolts which serves to stop the detector case moving upward. One of the wires yielded and the balance of force was destroyed. During pulling up the cage from the bottom of sea the USB signal cable was scratched near the cable gland by the sharp edges of the stopper and/or by one of two screw bolts. In Fig. 2 scratches are also seen  on the cable gland.

The weather was not so good in the morning. Large swells made it difficult to properly fix the detector, the camera, the flashlights, GoPro, and the attitude and depth sensr in the cage. While carrying out these delicate tasks on the boat, the main rope happened to be tied to a wrong place.

Learning from the failure, we have already rewritten our setting up manual and established double checking procedures. Some encouraging news is that we have already obtained an identical detector and USB cable, and we are planning the eighth exploration in early December. 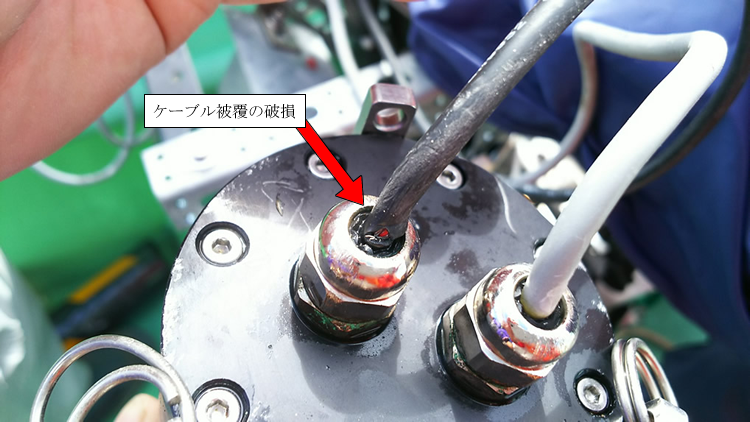